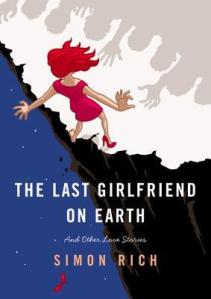 This was my first dive into the words of Simon Rich, despite consistently ranking the show he created (that is based on this collection), Man Seeking Woman, as one of my top five favorite TV shows. This is a collection of humorous, laugh-out-loud stories that largely revolve around heterosexual relationships from the perspective of a dorky man in his 20s/30s.

Because I knew I loved the tone of Man Seeking Woman, the absurdist comedy featured in this book was something I was familiar with and enjoyed. A lot of the storylines for the show were lifted from this collection, which makes some of the particularly absurd examples easier to visualize in my brain since I had already seen them depicted in the show.

Within the first 6 pages of the collection, I had already laughed out loud three times. The jokes I laughed the most at were New York situational humor though, so they may not be as funny to someone who hasn’t spent a lot of time in the city, but oof did I love them.

Upon finishing the incredibly enjoyable first season of Married, a show on FX starring Judy Greer, I remembered that I had placed her memoir on my TBR list a few weeks ago and decided to move it to the top. I checked out the audiobook from my local library and finished listening in a day. I was able to finish it so quickly partly because it was fairly short for an audiobook, stretching a little bit longer than five hours, and partly because listening felt like an extended catch up conversation with one of my friends.

Judy Greer narrates her memoir which alternates between mainly describing her early days growing up as an only child outside of Detroit, Michigan, and her current life as an actress, dog owner, wife, and stepmother in Los Angeles, California, while also briefly covering her time as a theatre undergrad in Chicago. Her tales of her life aren’t in chronological order and you weave between Greer’s current life to things that happened when she was a wee one. Because of the briefness of the book, I felt like the deviation from a linear storyline spiced the book up a bit.

Even though it seems most other readers enjoyed her recounting her place as an actress in Hollywood the most within the memoir, my favorite sections of the book were listening to Greer describe her love for Detroit and her heartbreak at how much Detroit is currently struggling as a city. It was in these moments that I feel like Greer was exposing me to something completely new, as I’ve never read someone describing Detroit, a city I’ve never visited, in such an authentic and touching way.

However, if you’re more interested in hearing about Greer’s time as an actress who’s actively working, but isn’t on the A-list, you won’t be disappointed in this book. If you recognize the author’s face from the cover art of the book, but can’t quite place her, you’re not alone. In fact, Greer devotes quite a bit of time in her memoir to explaining the phenomenon of having been in so many projects and being approached by people who can’t place her or requesting for her to help them deduce where they know her from. (Side note: if you recognize a celebrity and feel the need to approach them, try to make sure you actually know who they are. Bigger side note: if you recognize a celebrity and they are in public, but not in a place where it’s encouraged to talk to them such as a book signing, meet and greet, etc., maybe don’t approach them – celebrities need to buy milk at the grocery store, too, and they also have bad days when they don’t want to talk to anyone, especially a stranger.) Greer details life as a working actress, but doesn’t conflate it with this sparkly world that is so much better than the world of the normal plebeians – she still has to make food for her children that they hate and pick up her dog’s poop at the end of the day!

Greer’s down-to-earthness makes her so likable and this book so accessible. This book is not a tell-all revealing some deep, dark secrets like some celebrities release or a memoir bragging about the glamor of being a celebrity, but is a book about a normal person who happens to act as their profession. True to many of the characters that Greer is cast to play, she seems like one of your friends who also happens to be a successful, but not too successful, actress! My partner and I have been fans of Judy Greer for quite a while as she pops up in so many of the things that we love, and we frequently recount how we loved her in Love Monkey, a short lived and unpopular comedy from 2006. This book definitely gave me another layer of appreciation for Judy Greer, but probably isn’t a good read for someone who isn’t already a fan of Greer’s (like me) or doesn’t want to act professionally.

If you’re interested in checking out Judy Greer’s work as an actress and not as an author, you should definitely watch Married! The first season can be found on Hulu and the second season is currently in the process of airing on FX.

Unrelated to this book review, I wrote this while watching the newly released Kacey Musgraves Tiny Desk concert. It’s amazing and had many tambourine beats that frequently woke up my aunt’s dog as he snoozed on my lap. Check out the Tiny Desk concert here and look up her tour dates here! I’ll be heading to the New York tour stop in October and I can’t wait!