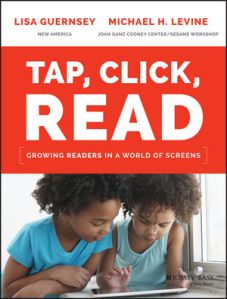 I purchased Tap, Click, Read: Growing Readers in a World of Screens because it was relevant to my work as an educational media researcher. When I know I’m going to have a lot of travel in my future, I always try to scoop up a work-relevant read to indulge in during spurts of travel. This allows me to feel productive for work things when I’m not able to be online and respond to emails quickly.

This book satisfied my itch to productively read for work! Soon, I’ll be beginning a project that examines how educational programming (including television, apps, websites, and digital games) influences literacy skills so this book was a perfect primer for helping me frame my thinking around literacy and digital screens. In fact, I’ve recommend this book to all of my coworkers who will be embarking upon this project with me.

Tap, Click, Read serves as a great overview of many current research studies which examine the intersection of literacy and emerging technologies. Since I wasn’t familiar with many of the existing literacy studies, the book was immensely helpful in furthering my knowledge base. The book would also be a great read for anyone who works with mediating media or books for young children, educators, librarians, caregivers, and family members so that they can learn ways to encourage positive reading habits and intellectual curiosity within the young children in their lives. While I was highlighting portions of the book that I found particularly interesting, I found half of my highlights to be work-related and the other half to be reading tips that I wanted to relay to my brother, who is the new father of a 3 month old. As far as being a book centered around research, I found it to be very accessible and not daunting or full of academic jargon.

Though as a researcher, I unfortunately had some pet peeves when it came to reading the print version of this book. I make that distinction because I think the digital version had more features (such as the ability to click on notes in the book and watch videos that tied into certain sections). Instead of traditional footnotes or endnotes to link to citations or clarifications, the book features “Notes” at the end of each chapter that are organized by chunks of words that appear in the chapter. As someone who was very interested in seeing any citations and clarifications, I found this extremely annoying because it would have forced me to constantly toggle between the text and Notes to see if anything was included. This made it extremely difficult for me to be able to follow up independently on any specific studies that were mentioned in order to make my own opinion about their findings, which may have been an intentional choice by the authors or the editor.

I also noted a small error in the description of one of the studies included, which mentioned that Ice Age was a film from Disney: it’s not, it’s from Blue Sky Studios, 20th Century Fox, HIT Entertainment, and 20th Century Fox Animation. While this is a very simple mistake, it made me wonder if other bigger and less obvious mistakes existed within the book that would be difficult to find because of the annoying Notes style.

Despite my pet peeves, I thoroughly recommend this book to anyone who is interested in thinking about how literacy is evolving for young children due to the emergence of new technologies and how we can continue to continue to prioritize literacy in the home, classroom, community, and digital sphere.